Greek Swap of Its Debt Appears to Be Secure 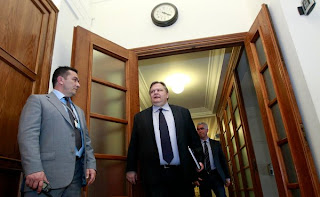 Greece appeared to have clinched a landmark debt restructuring deal with its private sector lenders late Thursday. The deal would clear the way for the release of bailout funds from Europe and the International Monetary Fund that would save the country from default.

Given all the twists and turns in the recent negotiations, and the ups and downs in Greece’s long debt struggle, something could still go wrong at the last minute, participants said. But most bond investors and government officials were expecting a positive outcome on the deal, which would help buy additional time for a European crisis that has recently shown signs of cooling down.

Greek officials said the total number of participants in the deal would be announced at 6 a.m. Friday, London time — 1 a.m. Friday in New York.

Stock markets in Europe were buoyant Thursday. The interest rates on the government debt of Italy and Spain were down as fears eased that a Greece default might start a panic among holders of other indebted European nations’ bonds.

The European Central Bank also had a calming effect when it said on Thursday that it would hold a crucial interest rate steady on signs that the region’s economy and financial markets were stabilizing.