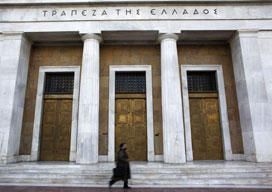 Billions of dollars are to be paid out in insurance-like instruments as Greece on Friday pressed ahead with the largest ever sovereign debt restructuring.

In a test case for markets, the International Swaps and Derivatives Association, the derivatives trade body, announced there would be a pay-out, or credit event, for holders of credit default swaps.

It means there will be a net $3.2bn pay-out on CDS contracts, according to the data warehouse Depository Trust & Clearing Corp, in a boost for the relatively new market in sovereign debt protection that could also benefit eurozone debt markets amid worries that a failure to trigger could have undermined an important hedging instrument for holding government bonds.

However, there was a long delay over the decision by the ISDA determinations committee, which is made up of 15 global banks and investment funds, that annoyed some investors.

Uncertainty still hangs over the CDS market as an auction process to decide the amount of pay-outs may not take place for another week.

Bill Gross, who runs the world’s biggest private bond fund at Pimco, warned that CDS had been undermined by the saga. “The rules have been changed here,” he said in a radio interview. “The sanctity of their contracts is certainly lessened.”