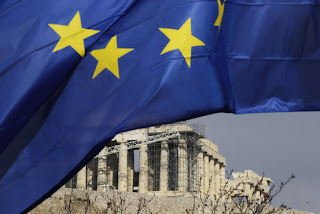 A group of financial-market players on Monday will determine that holders of $3.2 billion in Greek credit-default swaps will receive around $2.5 billion in compensation for Greece's debt restructuring—a payout that mirrors the loss that creditors suffered.

But the happy outcome owes much to mere chance. It masks flaws in the contracts, say some market participants and legal experts, that have rattled investors and are leading to calls to revamp how the swaps are handled for defaulting sovereign nations. Credit-default swaps, or CDS, are insurance-like contracts designed to pay off when creditors aren't paid back.

The issue arises because Greece used so-called collective-action clauses to force a debt exchange on the vast bulk of its bondholders. It gave a package of new securities to its creditors and then tore up the old bonds.

The use of the clauses throws a wrench in the process of determining the size of the payout owed to CDS holders. Usually that payout is determined by the value of the defaulted, old bonds. But, in Greece's case, those bonds have been vaporized. And the new bonds creditors received in the restructuring are only a small part of a package that includes high-quality bonds issued by the euro zone's bailout fund. A new bond thus isn't a one-for-one replacement for an old bond.

That leaves potential uncertainty about the amount the swaps will pay. 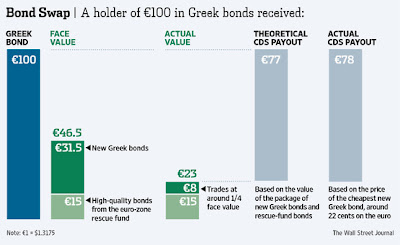 Posted by Yulie Foka-Kavalieraki at 8:54 AM