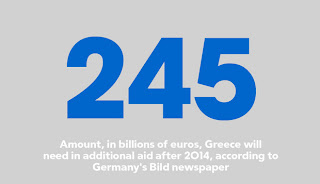 Only hours before the German parliament votes on Greece's second bailout package -- this time for 130 billion euros ($174 billion) -- it's clear that the local media and academia are firmly opposed to more money for the Hellenic state. While the rescue is almost certain to be approved with Social Democrat and Green support, it will have a negative impact on the governing coalition and among the electorate.

The mass-circulation Bild newspaper made its appeal to parliamentarians with the headline ``Stop! Don't go any further along this wrong path.'' Hans-Werner Sinn of the Munich-based Ifo Institute said a Greek bankruptcy would cost Germany alone 100 billion euros ($134 billion). If the euro countries were to provide comparable aid to other crisis nations in the region, it would cost 6.2 trillion euros, which would lead to the end of the euro. Greece should voluntarily leave the euro zone, Bild said. A whopping 80 percent of Germans opposed another Greek bailout, according to a Bild survey published yesterday.

The Frankfurter Allgemeine Zeitung warned that ``sooner or later (probably sooner), Greece will most likely give up the austerity policy forced on it by its donors'' as the Greek government falls apart. On the same front page, the newspaper ran a story about Greek parliamentarians transferring their private assets abroad while asking for money from their euro neighbors, namely Germany. Even a German government minister -- Interior Minister Hans-Peter Friedrich -- has now advised Greece to leave the euro, the FAZ reported. For consistency, the conservative broadsheet ran a sidebar article about a report that recommends reduced financial support for eastern Germany. Charity begins at home; and so does austerity.