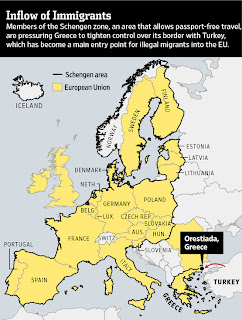 Greece, at the center of Europe's two-year-old debt crisis, is facing intensifying criticism from other European governments over the way it polices its land border with Turkey—presenting Europe's passport-free Schengen area with what could be its most serious test since it began functioning in 1995.

A majority of the illegal immigrants—most from the Middle East, Pakistan and Afghanistan—enter into the European Union through Greece, whose northern, mountainous region of Evros is the bloc's most porous external border.

Most don't stay in Greece with its weak economy but try to travel to other countries within the EU. Under Schengen rules, once in Greece, travelers shouldn't need to show a passport to enter any of the other 25 states in the Schengen area.

Greece has been frequently criticized by the European Commission, the United Nations and nongovernment groups for not complying with international law on asylum policy and for mistreating people reaching its borders seeking protection for political, humanitarian or other grounds.

More
Posted by Yulie Foka-Kavalieraki at 1:14 AM