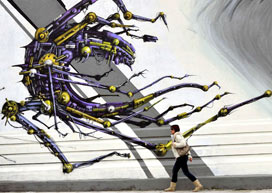 Investors holding 85.8 per cent of Greece’s private debt have agreed to participate in the country’s €206bn debt restructuring, clearing the way for Athens to complete the world’s largest ever sovereign debt default.

A statement from the Greek finance ministry said that participation would rise to 95.7 per cent after collective action clauses are activated to force hold-out investors to participate.

Pantelis Kapsis, the government spokesman, said: “This successful agreement will have a stabilising effect on Greece’s position.”

The deal, reached after a two-week campaign to persuade private investors to take part, is due to be approved by eurozone finance ministers at a teleconference later in the day.

The high participation rate is only possible through the use of CACs, which will make the offer binding on all holders of Greek-law bonds. That in turn will almost certainly trigger pay-outs under credit default swap insurance.

More
Posted by Aristides N. Hatzis at 8:51 AM