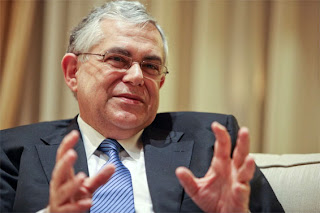 Greece’s caretaker prime minister insists that a “large, silent majority” of Greeks are willing to do whatever is needed to stay in the eurozone, despite near-daily anti-austerity demonstrations.

Lucas Papademos said Greece was determined to avoid another debt restructuring and its political leaders were prepared to put aside differences to implement structural and fiscal reforms.

In an interview with the Financial Times, Mr Papademos expressed confidence that Greece’s downward economic spiral would prove temporary. “I am convinced that we are more than halfway along the path to economic recovery – although the fiscal consolidation process will last longer,” he said. “Positive growth rates should be achieved within less than two years,” he said.

Mr Papademos’s defiance comes in spite of widespread fears outside Greece that its economic situation makes exit from the eurozone a distinct possibility. He admitted that Greece might need more outside support if it was unable to return to financial markets by 2015.

Read the Transcript of the Interview

See also
Posted by Yulie Foka-Kavalieraki at 12:14 AM