Greece Defaults, and Tries to Move On

A panel of market participants ruled later in the day that the restructuring constitutes a credit event and would trigger insurance-like contracts that pay off if creditors suffer losses. On Friday, ratings firms Fitch and Moody's declared Greece in default.

The restructuring will cut some €100 billion from the face value of Greece's obligations. Yet, Greece remains mired in a long recession; unemployment is at 21%; and even after the write-off, the debt level is well in excess of a year's economic output.

"Their problems are much greater than the solution that is in front of them," says Pawan Malik of Navigant Capital in London. "Greece's ability to come back to the market as a functioning and solvent sovereign is very doubtful."

Markets aren't hopeful, and that suggests Greece may face another restructuring—one that could well hit taxpayers of the countries that have been its rescuers. 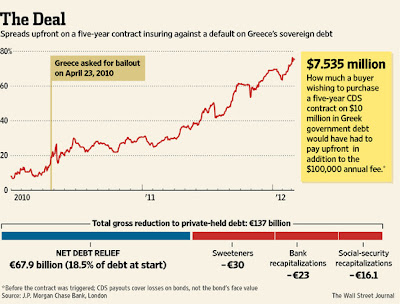 Posted by Yulie Foka-Kavalieraki at 7:39 PM