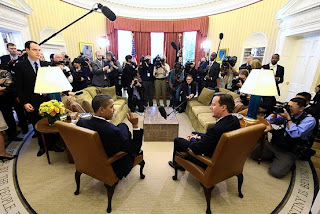 In U.S. politics, the euro-zone crisis has become a political Rorschach test.

The three main Republican presidential contenders bash President Barack Obama for wanting to turn America into "a European-style entitlement society" in Mitt Romney's words. From the right of the U.S. political spectrum, the crisis is a predictable consequence of an unsustainable welfare state: It's down to socialism.

For many on the left, the crisis is a warning about austerity—in particular, the dangers of premature and excessive budget slashing. In this view, German-inspired fiscal retrenchment in Europe's struggling economies is a recipe for deepening recession.

Each side is using Europe to support its view about the American economy. Yet the outcome of the euro crisis could have an important impact on the U.S. presidential race. If the current calm gives way to a new era ofturmoil this year, the cautious recovery of U.S. economic confidence could be seriously undermined—and President Obama's re-election chances weakened.

Mr. Obama has had to sit on the sidelines while the euro zone muddles through the first major financial crisis since the Second World War where the U.S. hasn't had a leadership role.

More
Posted by Yulie Foka-Kavalieraki at 2:08 AM