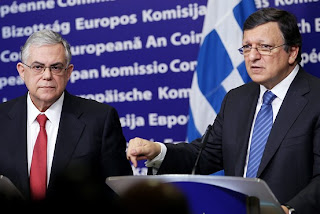 European leaders and finance ministers will meet Thursday and Friday in Brussels to finalize the second Greek bailout package and discuss measures to promote long-term growth, but there will be no decision on boosting the euro-zone rescue fund, EU officials said.

In a meeting that is likely to have "less drama" than recent gatherings, according to European Commission President José Manuel Barroso, the leaders are likely to focus on the way forward but avoid the key question of enlarging firewalls protecting against the sovereign-debt crisis. That discussion may take place later in March.

European Union heads of government will kick off talks on a set of economic reforms and steps to boost growth and jobs, as well as on recent developments in Arab countries.

The leaders are expected to give European Council President Herman Van Rompuy a nod for a fresh term running through the end of 2014. He is also set to be elected to chair the summits of euro-zone heads of government.

"On Greece there's been real progress in the last couple of weeks," Mr. Barroso said, adding that the risk of a credit crunch has been reduced by the actions of the European Central Bank. "One of the key issues is one of confidence, of trust...that is why I want discussion of growth to be as concrete as possible."