Austerity or Stimulus? What We Need Is Growth

Greece is collapsing, Italy and Spain’s output is declining, and even Germany and the U.K. are slowing down. In addition to their direct economic costs, these “austerity” measures aren’t even swiftly closing budget gaps. As incomes decline, tax revenue drops, and it becomes harder to cut spending. A downward spiral looms.

These events have important lessons for the U.S. Our government cannot forever borrow and spend 10 percent of gross domestic product each year, with an impending entitlements fiasco, to boot. Sooner or later, we will have to fix our finances, too. Europe’s experience is a warning that austerity - - a program of sharp budget cuts and (even) higher tax rates, but largely putting off “structural reforms” for a sunnier day - - is a dangerous path.

Why is austerity causing such economic difficulty? What else should we do?

Lack of “stimulus” is the problem, say the Keynesians, epitomized by the New York Times and its columnist Paul Krugman, who has been crusading on this point. They claim that falling output in Europe is a direct consequence of declining government spending. Yes, 50 percent of GDP spent by the government is simply not enough to keep their economies going. They -- and the U.S. -- just need to spend more. A lot more. 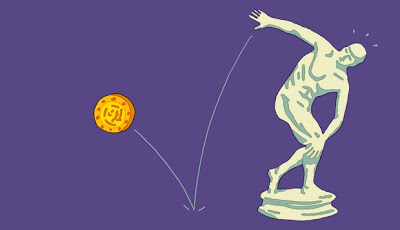 Posted by Yulie Foka-Kavalieraki at 1:06 AM