Too long an illness 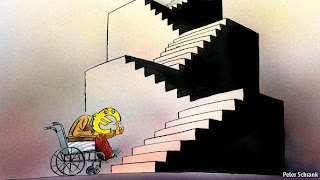 They barely dare say it, but the doctors are strangely confident: after a long illness, the euro may be recovering. This week’s all-night surgery by finance ministers to excise a festering lump of Greek debt went better than expected. “We have put in place almost all of the elements we need to make the crisis gradually go away,” says one. “We may be beyond the acute phase, and could be making the transition to normalisation.” It is the optimism of despair: the patient has not died, so must be improving.

Many are sceptical. But consider the evidence. Greece may now stabilise. It must meet conditions to get its money and will endure pain for years. But the risk of chaotic default and exit from the euro has receded. Private creditors have taken a big loss, yet the markets are muted. Elsewhere the signs are good. Italy is reforming, as is Spain. Most European Union countries have agreed to a new fiscal compact that will strengthen budget discipline. The European Central Bank (ECB) has averted a credit crunch by injecting liquidity into banks. And the defences against contagion may soon be boosted. On March 1st EU leaders will debate calls to enlarge their rescue fund by half. This could prompt others to pay more into the IMF, which would also help.

The recession this year is now forecast to be short-lived and mild. The euro zone’s temperature chart—the spread of bond yields over German bunds—is gradually narrowing. For the first time in six months, a week has passed without the ECB making emergency bond purchases.

So is the crisis over? Not so fast, say critics.

Start, again, with Greece. Far from curing the patient, the medicine is coming close to killing it. Its slump (a cumulative contraction of 16% of GDP and shrinking) may enter the record books. The pressure to chase an ever-receding deficit target has created a death spiral. Success will be slow and take a generation; failure will be an ever-present risk. The programme is “accident-prone”, says a leaked assessment by EU and IMF experts. Any number of problems—deeper recession, slower privatisation, fewer structural reforms—could bust the forecast that Greek debt should drop to 120% of GDP by 2020. This threshold was chosen for political reasons: it is roughly Italy’s debt ratio. Yet Italy is hardly healthy; it too struggles to convince investors that its debt is sustainable.