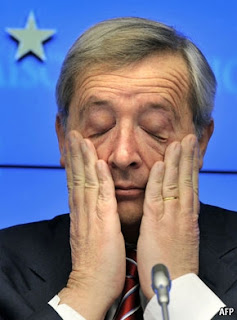 Even Jean-Claude Juncker, Luxembourg’s prime minister and a veteran of late-night summitry, was rubbing his eyes. As the Eurogroup of finance ministers slipped off to bed in the early hours of February 21st, having agreed on a second bail-out package for Greece, the response of Europe’s bond markets was pretty sleepy, too. Investors had expected a deal; that the European Central Bank (ECB) stands ready to lend hundreds of billions of euros to banks at a second auction of three-year money, on February 29th, had also dulled the market’s senses.

The terms of the deal might yet cause some sleepless nights. One concern is that the pain demanded of private bondholders has steadily mounted as the outlook for Greece’s public finances has worsened. The IIF, a group representing private-sector banks, agreed with the Eurogroup to losses of more than half the face value on Greek bonds. Private investors will be offered new government bonds worth 31.5% of the principal of their bondholdings, with low interest rates and maturities of 11-30 years. They will receive a further 15% in short-dated bonds backed by the euro zone’s temporary bail-out fund.

The resulting 53.5% of losses are higher than the 50% tentatively agreed upon in October, and far higher than the write-down touted last July. A larger sacrifice was judged necessary to give Greece a fighting chance of getting its public debt down to 120% of GDP by 2020, the benchmark for a “sustainable” debt burden set by Greece’s “troika” of rescuers—the European Union, the IMF and the ECB.

The troika did its bit to make the numbers add up. The interest rate on the Greek loans made by euro-zone countries was lowered; gains from central-bank holdings of Greek bonds will be given up. But private bondholders were hit disproportionately hard. They will bear around 95% of the cost of reducing Greece’s current debts, reckons Gabriel Sterne of Exotix, a bond broker. That ought to worry bondholders of other euro-zone countries, such as Portugal, which may need a second bail-out next year. Its benchmark government bond trades at 57% of its face value, suggesting that private investors fear losses if and when a new deal is brokered.