Questions in Europe as Outlook Falls 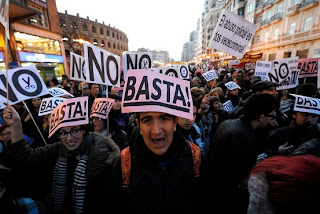 The European Union on Thursday sharply downgraded its growth outlook for the region's economies, raising new questions about the virtues of austerity and setting the stage for a renegotiation of budget-deficit targets for some member states.

As the result of slowing global growth and a flare-up of the euro zone's debt crisis, the EU forecast gross domestic product for the 17 users of the common currency will contract 0.3% this year, compared with a previous forecast of 0.5% growth. Italy, Greece and Spain, all countries that are pushing through draconian austerity measures, suffered the biggest downgrades.

The EU also forecast that real GDP for the euro zone is expected to decline 0.3% in the first quarter, after dropping the same amount in the last quarter of 2011. Under one common metric, two consecutive quarters of negative growth signals a recession.

See also
Posted by Yulie Foka-Kavalieraki at 8:09 AM