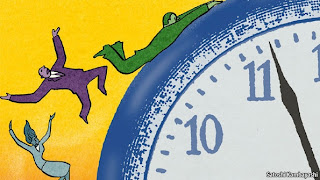 Now almost five years old, the economic crisis rumbles on. In order to assess how much economic progress it has undone, The Economist has constructed a measure of lost time for hard-hit countries. It shows that Greece’s economic clock has been turned back furthest: it has been rewound by over 12 years. Elsewhere in the euro area, Ireland, Italy, Portugal and Spain have lost seven years or more. Britain, the first country forced to rescue a credit-crunched bank, has lost eight years. America, where the trouble started, has lost ten (see left-hand chart).

Our clock uses seven indicators of economic health, which fall into three broad categories. Household wealth and its main components, financial-asset prices and property prices, are in the first group. Measures of annual output and private consumption are in the second category. Real wages and unemployment make up the third. A simple average of how much time has been lost in each of these categories produces our overall measure.

Stockmarkets give some of the starkest results. American equities lost a quarter of their value in the month after the collapse of Lehman Brothers in September 2008. Shares are an important component of households’ pension-fund wealth, and in that month alone five years of gains were eradicated. The main indices have improved markedly since then: the S&P 500 is back to around 90% of its peak value. But they were at these levels back in the late 1990s, too, so some investors will have made no capital gains in 13 years. Greek stocks were higher in 1992 than today: 20 years have been wiped away.