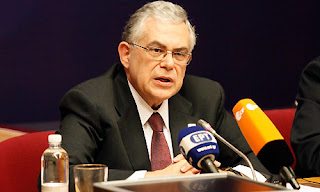 Greek officials have been called into a crisis summit as talks with European Union and International Monetary Fund negotiators over the country's mounting debts seem to have stalled.

Prime minister Lucas Papademos told aides that a crisis meeting of party leaders would be called as early as Thursday to thrash out a response to an increasingly intransigent negotiating team sent by Brussels, which is demanding severe austerity measures before sanctioning a further €130bn (£109bn) of bailout funds.

Papademos and his team of aides returned in sombre mood on Tuesday from a round of talks in Brussels and Frankfurt at the offices of the European Central Bank (ECB), despite relief that a German proposal to install an EU commissioner in Athens, with special oversight of Greek finances, had been quashed.