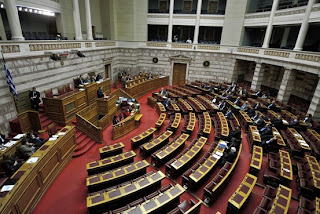 The Greek Parliament's approval Thursday of the country's debt-restructuring plan—and of tough measures aimed at forcing it on creditors—has narrowed the options for most of the investors holding on to the country's beleaguered bonds.

The restructuring is designed as an exchange of existing bonds for new ones with less than half the face value. The swap is expected to be proposed formally Friday and run until March 9, according to a Greek official, giving creditors two weeks to contemplate their moves.

What they will do depends on who they are and what sort of debt they are holding. How it plays out will determine whether Greece actually has to use the new powers it has just given itself to force creditors into line. Many lawyers and analysts say it is likely, but not assured, that Greece in the end will have to use those powers.

Of Greece's roughly €350 billion in debt ($463.7 billion), some €206 billion in bonds are eligible for the restructuring. The balance of the debt comprises in large part rescue loans from the euro zone and the International Monetary Fund, treasury bills and the holdings of the European Central Bank, which are exempted.

According to a Credit Suisse compilation, all but about €18 billion of the €206 billion in bonds were issued under Greek law. Under Thursday's law, Greece can make changes to all of those bonds with the approval of creditors holding two-thirds of the whole lot, or around €125 billion.