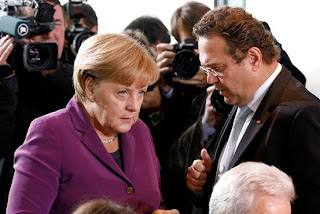 Chancellor Angela Merkel's effort to rally the German people behind her strategy for saving Greece and the euro suffered a blow over the weekend after a senior member of her government said Athens should be encouraged to leave the currency bloc.

"The chances that Greece can renew itself and become more competitive are surely greater outside the currency union than within it," Interior Minister Hans-Peter Friedrich said in an interview with Der Spiegel, a German weekly. Mr. Friedrich, who belongs to the Bavarian sister party of Ms. Merkel's Christian Democrats, added that Athens shouldn't be forced to leave, but rather given incentives "that they can't refuse."

Germany's Parliament is expected to approve Greece's latest bailout on Monday by a wide margin with the backing of major opposition parties. But with a solid majority of Germans opposed to the package and growing opposition in her own coalition, Ms. Merkel could find it difficult to secure continued support down the line, especially if Athens fails to follow through on budget cuts and structural overhauls it has promised.

German opposition to helping Greece isn't new. Mr. Friedrich is the first minister to publicly break ranks with the chancellor over the issue, however, reflecting the growing dissension she faces over the financial risks Berlin is assuming. More significantly, Mr. Friedrich has lent an influential voice to the idea that Athens can be nudged out of the euro zone without triggering the currency's collapse.