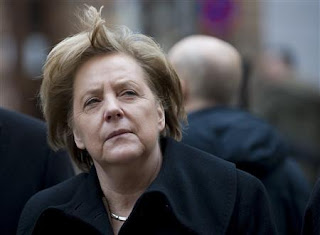 The German parliament will almost certainly vote to endorse a new Greek bailout package on Monday, but Chancellor Angela Merkel may be forced to rely on opposition support to overcome a determined band of rebels in her coalition.

At least a dozen members of parliament in Merkel's center-right coalition said they would vote against the 130 billion-euro ($175 billion) rescue package. If the number of rebels rises to at least 20, the measure will pass only with opposition support.

That would be a humiliating defeat for Merkel, which analysts and opposition leaders said would raise doubts over whether her coalition can survive.

Merkel's allies are confident they have enough votes for a majority. The opposition Social Democrats and Greens will vote for it.

More
Posted by Yulie Foka-Kavalieraki at 1:50 AM