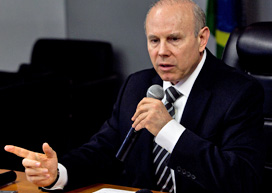 Brazil’s finance minister has strongly questioned whether some European Union countries should remain in the region’s single currency.

In an interview with the Financial Times, Guido Mantega suggested that the rigidity imposed by the euro was not appropriate for all of its current members, some of which should probably exit once the crisis abates.

“I don’t know if all the members of the European Union really fit in the European Union…it has to be rethought after we overcome today’s economic problems,” he said. “Then it is possible that some of the countries should exit because it would be more convenient for them.”

His striking comments were made on the eve of this weekend’s G20 meeting of finance ministers and central bank governors.