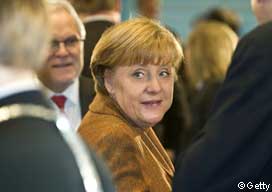 Unemployment figures have highlighted the widening gap between Germany and many fellow eurozone members, a day after Angela Merkel secured a new treaty enshrining Berlin’s vision for tough fiscal discipline.

Unemployment in the 17 euro countries climbed to 10.4 per cent in December, with the November rate revised upwards to the same rate, setting a fresh record since the introduction of the single currency in 1999. So-called “peripheral” members such as Spain and Greece recorded the highest rates, of 22.9 per cent and 19.2 per cent respectively.

By contrast, national data from Germany, the eurozone’s bulwark, showed joblessness declined in January to 6.7 per cent, the lowest level since reunification in 1991.

Almost one in 10 – or 23.8m – people in the European Union are now jobless, equivalent to more than twice the working-age population of the Netherlands.