Greek opinion is divided over the government's plan to offer the Parthenon and other heritage sites as film and photo backdrops to raise revenue during its current economic crisis. "This is sacrilege!" one Greek tour guide protested. But others thought that, humbling though the measure might be, it was at least better than begging for foreign bailouts.

For some Greeks, the debate may have evoked a sense of déjà vu. Pericles, the great Athenian statesman, also proposed raiding the Parthenon to meet a shortfall, nearly 2,500 years ago — challenging the boundaries not just of good taste but of religious taboo.

The Parthenon has always been a symbol of Athenian pride, but when first built in the mid-5th century BC, it was also a monument to Athenian wealth. Within it was housed the state treasury and a hoard of gold and silver vessels, the sacred property of Athena. A colossal statue of that goddess, decked with ivory skin and gold-leaf armor, dazzled visitors with a display of Athens' massive fiscal surplus.

To exploit such holy relics was, ordinarily, a heinous crime, and "temple robber" was about the worst thing an ancient Greek could be called. Yet financial crises have a way of redefining what is sacred and what is profane, as modern Europe has learned. So too do long wars, which often lead to financial crises — as did the war Athens and Sparta began in 431 BC, the heyday of Pericles. 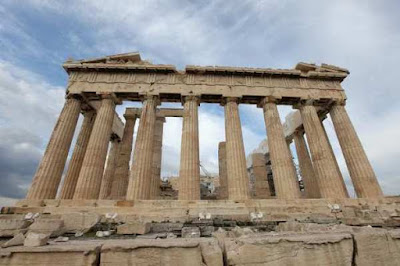 Posted by Yulie Foka-Kavalieraki at 4:30 PM