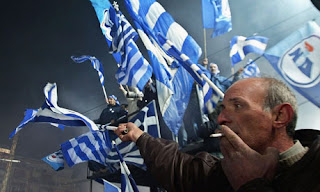 Greece gave MPs a first detailed glimpse of the bond swap deal designed to knock €107bn (£90bn) off its debt held by banks and other private investors.

The coalition government put legislation before parliament that will allow for a wide range of loans held by international investors to be swapped for 30-year loans with a fixed interest rate.

The announcement, which followed a cabinet meeting to discuss implementation of the debt-crippled country's new austerity programme, follows a series of protests by Greek workers. Students are the latest to protest, with groups resisting an overhaul of higher education that also denies them faculty voting rights.

A deal between the eurozone leaders and Athens, sealed earlier this week after a series of bruising encounters in Brussels, has cheered the wider financial community. After months of brinkmanship, the agreement has pushed markets to new heights, with the S&P 500 in New York, helped by positive US jobs data, reaching levels not seen since 2008.