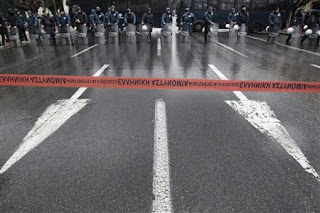 Trade unionists, communists and pensioners angry at punishing spending cuts in Greece marched through central Athens on Wednesday as lawmakers set to work on legislation needed to secure payment of a second bailout for the debt-laden country.

Ringed by riot police, parliament debated a string of measures demanded by euro zone states in exchange for a 130 billion euro rescue, endorsed by finance ministers on Tuesday after hours of torturous negotiation in Brussels.

The bailout averts a chaotic default next month, but does little to allay doubts over Greece's long-term financial and social stability as the country faces spiraling unemployment and a recession in its fifth year.

"Those people in there are traitors," said construction engineer Antonis Malkos, 55, pointing at the parliament.

"Greece is an independent country, not a protectorate. When the program crashes, and it will crash, the lenders will take away our national wealth," he said.

The comments reflected unease among Greeks over the terms of the new rescue package -- the second in less than two years -- giving Greece's European partners unprecedented rights to inspect national finances and make sure it sticks to the deal.

More
Posted by Yulie Foka-Kavalieraki at 12:15 AM