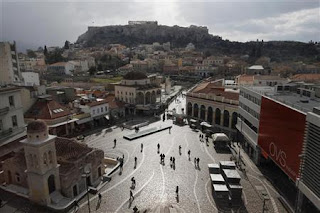 Greece must make "difficult" decisions in the coming days to clinch a debt swap agreement and a 130 billion euro bailout package needed to avoid an unruly default, the government said on Tuesday.

Near-bankrupt Greece is struggling to convince skeptical lenders it can ram through spending cuts and labor reform to help bridge a funding shortfall driven by a worsening economic climate and its previous reform plan having veered off track.

With a long-awaited debt swap deal largely almost secured, Athens' focus is now squarely on the reform front. Failure to persuade lenders it can follow through on its pledges could put both the bond swap and the country's latest bailout at risk.

"It's all down to whether the Greeks manage to convince the troika that they will implement the necessary austerity measures," a source close to the talks said, referring to so-called "troika" of foreign lenders - the European Central Bank, the EU and the International Monetary Fund.