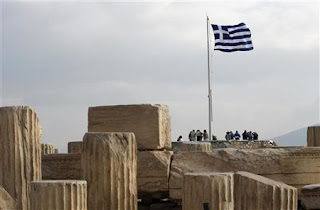 Greece formally launched a bond swap offer to private holders of its bonds on Friday, setting in motion the largest-ever sovereign debt restructuring in the hope of getting its messy finances back on track.

The swap is part of a second, 130-billion-euro rescue package to claw Greece back from the brink of a disorderly default that had threatened to send shockwaves through the financial system and punish other weak euro zone members.

The complex deal was finalized this week after months of tortuous negotiations between Greece and its bondholders that were complicated by European partners driving a hard bargain, hedge funds holding out for a default and pressure on public creditors like the European Central bank to chip in.

The swap, in which investors will trade bonds for lower-value debt securities, aims to slice 100 billion euros off Greece's over 350 billion euro debt load.

The head of the International Institute of Finance (IIF), a bank lobby group that negotiated on behalf of the private sector, expressed optimism that the exchange would attract high participation from investors.

"We remain quite optimistic that once investors study this proposal ... there will be high take up," Charles Dallara, IIF managing director, said at the G20 meeting in Mexico City.