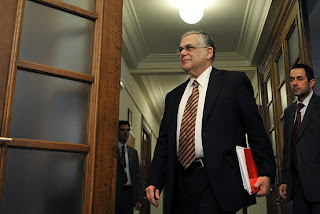 Greece on Friday formally launched a bond-swap offer to private-sector creditors, kicking off a €100 billion ($134.7 billion) debt write-down plan that is part of a fresh multibillion-euro rescue agreement Athens is seeking from its international creditors.

The Finance Ministry said that at least 90% of the face amount of all bonds selected to participate in the debt deal must be exchanged in order for it to go forward. However, Greece—along with its European partners—would consider proceeding with an alternative bond swap if only 75% of bondholders participate, without necessarily forcing holdouts to sign on to the deal.

Earlier this week, euro-zone finance ministers approved a fresh €130 billion bailout for Greece and the debt-restructuring program. The two deals are linked: Greece's European partners demanded that the country proceed with a debt restructuring before they would approve the new loan.

Under the terms of the debt deal, Greece's private-sector creditors will waive 53.5% of the principal on the bonds they hold by swapping their old bonds with new ones, worth less than half the face value of the original bonds and carrying lower coupons. The deal aims to erase as much as €107 billion from Greece's sovereign-debt burden and bring its debt ratio down to a more sustainable 120.5% of gross domestic product by 2020, from more than 165% now.