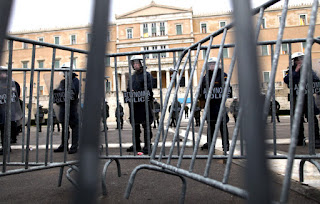 Greece’s government formally asked investors to exchange their holdings of government debt for new securities in the biggest sovereign restructuring in history.

“The Ministerial Council of the Hellenic Republic today approved the terms of invitations to be made to private sector holders,” the Ministry of Finance said in a statement on a website set up for the exchange. The bonds subject to the invitation had a total face value of about 206 billion euros.

The government seeks a 90 percent participation rate and set a 75 percent rate as a threshold for proceeding with the transaction, according to the statement.

Parliament approved laws yesterday to permit the exchange and cut 106 billion euros ($143 billion) of the country’s debt. Private creditors gave their backing earlier this week as euro area finance ministers weighed a 130 billion-euro package for the nation, its second rescue.

Charles Dallara, who represented private bondholders in debt-writedown talks with the government, said he expects a majority of investors will agree to a voluntary bond swap.

“I’m quite optimistic,” Dallara, the managing director of the Institute of International Finance, told reporters in Mexico City today ahead of a meeting tomorrow of finance officials from the Group of 20 nations. He said that he expects “a high take- up” among bondholders.