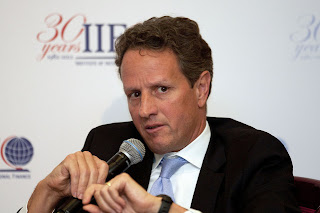 Germany was left to dig deeper to combat the euro-area debt crisis after the Group of 20 nations told Europe to come up with more financial firepower before they consider lending outside support.

The decision by G-20 officials to rebuff European calls for assistance in their crisis-fighting effort pending an increase in its own financial backstop puts the onus on Germany, already the biggest national contributor to bailouts, to overcome its resistance to doing more.

With a parliamentary vote on a second Greek aid package looming in Berlin today, Chancellor Angela Merkel’s government must now decide whether to back plans at a March 1-2 European Union summit to combine rescue funds and produce a potential firewall of 750 billion euros ($1 trillion).

Europe “doesn’t really need any outside money,” Jim O’Neill, chairman of Goldman Sachs Asset Management, said in an e-mail. “It needs their own policy makers, especially Germany, to show leadership.”

Germany went in to the Mexico meetings of finance ministers and central bankers urging G-20 nations to find fresh money for the International Monetary Fund that could be channeled to defuse the euro-region crisis now in its third year. IMF chief Christine Lagarde, who attended the talks, said she wants to raise the Washington-based fund’s lending capacity by $500 billion to fend off “further shocks” to the global economy.

More
Posted by Yulie Foka-Kavalieraki at 7:58 AM