Germany to set the terms for saving the euro 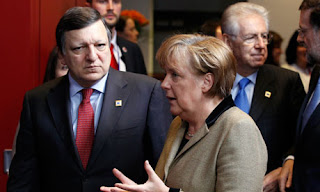 Germany's campaign to set the terms for saving the euro was crowned with success when EU leaders sealed agreement on a new "fiscal compact" for the single currency zone, enshrining Berlin's insistence on rigour and discipline and establishing a new punitive regime for budgetary profligacy.

Chancellor Angela Merkel returned to Berlin with the new treaty in the bag, but also appeared more isolated in Europe in her hard line on Greece and how to save the country from defaulting on its debt.

All EU countries except Britain and the Czech Republic signed up for the new pact on Monday night, although Poland and France sparred over who would be allowed to take part in the twice-a-year eurozone summits which are a feature of the new regime.

President Nicolas Sarkozy sought to restrict the summitry to the 17 countries of the eurozone, while the Polish prime minister, Donald Tusk, insisted that non-euro countries who sign up to the new pact should be allowed to attend.

"It's very symbolic," said a senior EU diplomat. "A matter of national flags and national pride for the Poles."