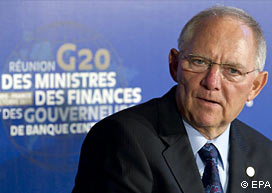 The German government has softened its resistance to increasing the eurozone’s “firewall” against financial-market contagion from the Greek crisis by signalling it would consider the combination of the region’s temporary rescue fund with its permanent successor.

Wolfgang Schäuble, finance minister, said using “the remaining funds” in the European Financial Stability Facility to bolster the European Stability Mechanism was “one possible solution to the question” of how to better guard against bond market sell-offs hitting Italy or Spain.

With this, Mr Schäuble broke with the German government’s official stance that there was “currently no need” to increase the size of the €500bn ESM – due to start life by mid-year – and that eurozone heads of government would discuss the issue only some time in March.

He was speaking after briefing the German parliament’s budget committee about a second, €130bn aid package for Greece, and just before setting off for the weekend meeting of G20 finance ministers in Mexico, where he is set to face questions about Germany’s resistance to bolstering the firewall.