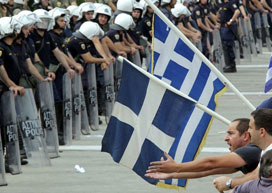 German tax collection experts have volunteered to go to Greece to help combat widespread evasion, in a move that risks reigniting tensions between Berlin and Athens.

Germany’s federal states have recruited about 160 experts to serve under a European Union and International Monetary Fund initiative to improve tax administration in Greece.

A Greek government official reacted positively to the plan: “Such assistance with upgrading the quality and efficiency of the Greek public administration is very welcome.”

But the arrival of the German officials in Athens could reawaken anti-German sentiment that was triggered by a plan last month to appoint a “budget commissioner” to oversee Greece’s finances. A front-page headline in ProtoThema, an Athens tabloid, on Sunday described the volunteers as “an assault force of German tax collectors”.

A senior tax official said: “We don’t need outside help, we need better computer systems and more co-operation with other government departments.”