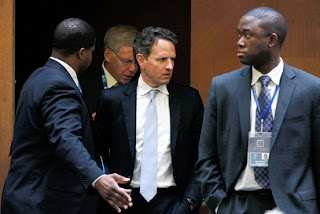 Officials from the world's leading economies deferred for months key decisions on international aid for Europe as they awaited more euro-zone action to fight the Continent's debt crisis.

Finance ministers and central bankers from the Group of 20 advanced and developing economies, after a two-day meeting here, indicated they anticipate an agreement to expand Europe's rescue fund next month.

That move "will provide an essential input in our ongoing consideration to mobilize resources" to the International Monetary Fund, the G-20 officials said in a joint statement Sunday.

The lack of significant progress effectively punts further discussion of new international support until the G-20 ministers' next gathering in April. Officials hoped that could lead to a final, confidence-boosting agreement at a summit of world leaders in June.

G-20 officials acknowledged a long list of potential obstacles ahead. Greece must meet numerous conditions for its latest bailout within weeks. European officials recognized German reluctance to quickly raise the capacity of a euro-zone financial firewall—a rescue fund large enough to reassure markets that other troubled euro-zone economies will be able to manage their debts. The G-20 set that expansion as a condition for increasing IMF resources to support Europe. At the same time, officials noted that surging oil prices, partly due to tensions with Iran, threatened to depress a global recovery already weakened by European turmoil.