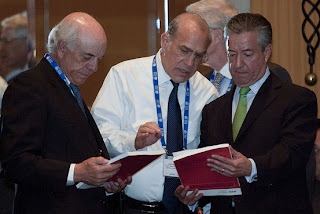 Officials from the world's leading economies debated the next steps to fight the European debt crisis, including conditions for boosting resources at the International Monetary Fund, but appeared set to defer key decisions until late March or April.

Finance ministers and central bankers from the Group of 20 advanced and developing economies, who started meeting here Saturday, kept their focus on the euro-zone turmoil as the biggest risk hanging over the global economy.

Non-European members of the G-20 are trying to push Europe to boost its own bailout fund before they deliver more IMF resources.

"Everything depends on whether the Europeans can push up their own rescue funds," one of the officials said. "The G-20 believes there have been major delays in Europe and expects a final decision on the firewall in March."

Many G-20 members want Europe to expand its rescue-fund capacity to at least €750 billion ($1.01 trillion), beyond the €500 billion cap planned for a fund coming online this summer.

While European officials had sought a deal on expanding that firewall at a summit next Thursday and Friday, resistance from Germany likely will delay any final moves at least until late March.