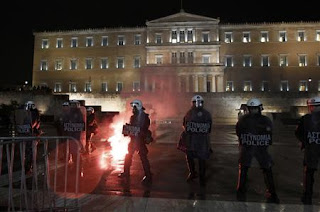 Fitch cut Greece's long-term ratings on Wednesday to its lowest rating above a default, becoming the first ratings agency to make the widely expected downgrade after the country announced a bond exchange plan to ease its massive debt burden.

It said Greece would be designated as having technically defaulted after the bond exchange is formalized, but the new bonds would be give and new rating.

All three big ratings agencies -- Fitch, Moody's and Standard & Poor's -- downgraded Greece in July when an initial debt swap plan was unveiled and have warned that losses for private creditors would trigger a temporary default.

As expected, Fitch said it was downgrading Greece to "C" from "CCC," and would follow up with further downgrade to a "restricted default" when the bond swap is completed.

It will then reassess the country's ratings when new bonds are issued as part of the debt exchange.