The Failing State of Greece

The first time I visited Athens, the city was in flames. It was December 2008, and riots, set off after a policeman’s bullet killed a teenager, engulfed the city. For several terrifying days, the rule of law was tenuous at best.

On my second trip, for the national elections in October 2009 when the Socialists won, I went to the movies one night. As I sat in the elegant, neo-Classical-style theater, an usher checked to make sure I was in the correct assigned spot. The jarring contrast made me laugh. In that cinema, at least, the rules were rules.

Last week, I stood outside that theater — the Attikon, it was called — and reeled at the sight of its burned-out shell. It had been gutted by fire on Feb. 12, a wild night when marauding bands of arsonists with Molotov cocktails targeted shops and buildings, most of them historic, while just blocks away the Greek Parliament approved the latest package of austerity measures demanded by Greece’s troika of foreign lenders. The troika — the European Commission, the European Central Bank and the International Monetary Fund — won’t give 130 billion euros in new loans without pain. The Greeks won’t accept the pain without anger.

As more than 6,000 policemen stood guard, these roving bands — several dozen criminals, by official estimates — infiltrated a vast, largely peaceful demonstration of more than 80,000 people and pushed the city into mayhem. Once again, Athens burned. Once again, the rule of law had foundered. But how badly? And how long before it would again? 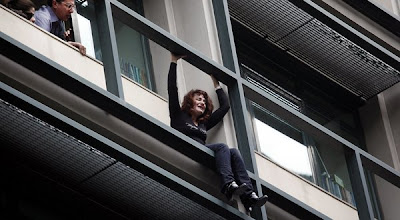 Posted by Yulie Foka-Kavalieraki at 12:00 AM