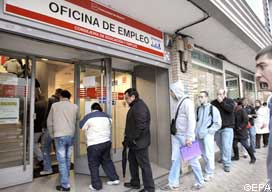 Just hours after European Union leaders signed a decree agreeing to focus their political energy on generating jobs and growth, the scale of the challenge was brought into stark relief by new data on Tuesday showing unemployment in the eurozone at a record high.

The number of jobless in the 17 countries of the single currency bloc rose in December for an eighth consecutive month to 16.5m – roughly the population of the Netherlands.

The unemployment rate at year end stood at 10.4 per cent, the highest level since the euro was introduced a decade ago, according to seasonally adjusted data from the EU’s statistical arm.

The 0.1 percentage point increase from November’s estimate compares with an unemployment rate of 10 per cent a year earlier. By the same measure, US joblessness in the same period fell nearly 1 percentage point, to 8.5 per cent in December.