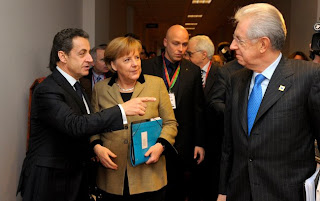 All but two European Union countries agreed Monday to new and tougher measures to enforce budget discipline in the euro zone, but the bloc still showed few signs of producing a comprehensive solution for the sovereign debt crisis or a credible plan to revive fragile economies across Europe’s weakened Mediterranean tier.

The meeting of 27 European Union heads of state and government here in Brussels was aimed at completing the text of a so-called fiscal compact for the 17 nations relying on or intending to join the euro zone — with only Britain and the Czech Republic opting not to adopt the measures.

After a meeting lasting seven hours, the leaders also issued a declaration calling for a new push to restart growth and combat joblessness across the Continent.

But a number of politicians and analysts said the pledge by the European leaders to create new jobs was mostly empty, and others complained that the proposed rules to keep deficits under control contained little to actually help nations with high borrowing costs.

The summit declaration also skirted the continuing problems in Greece, where a second bailout is being held up by the inability of the government in Athens to complete a deal with private holders of Greek bonds over the losses they should accept.