This is not original, but for reference I find some charts useful. In what follows I show data for the euro area minus Malta and Cyprus — 15 countries. I use red bars for the GIPSIs — Greece, Ireland, Portugal, Spain, Ireland — and blue bars for everyone else.

There are basically three stories about the euro crisis in wide circulation: the Republican story, the German story, and the truth.

The Republican story is that it’s all about excessive welfare states. How does that hold up? Well, let’s look at public social expenditures as a share of GDP in 2007, before the crisis, from the OECD Factbook: 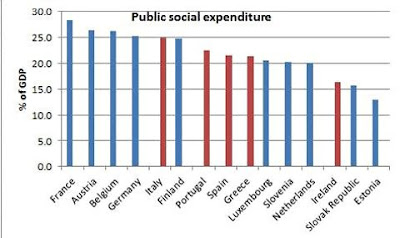 Hmm, only Italy is in the top five — and Germany’s welfare state was bigger.

OK, the German story is that it’s about fiscal profligacy, running excessive deficits. From the IMF WEO database, here’s the average budget deficit between 1999 (the beginning of the euro) and 2007: 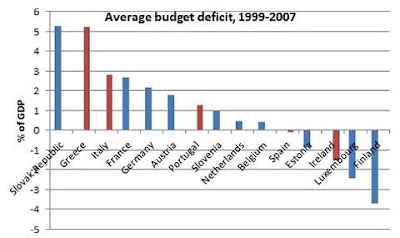 Greece is there, and Italy (although its deficits were not very big, and the ratio of debt to GDP fell over the period). But Portugal doesn’t stand out, and Spain and Ireland were models of virtue.