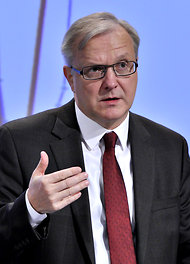 Europe’s economies are still on divergent paths, with Italy and Spain dragging down the region as it faces a mild recession this year that could turn far worse, an official forecast said Thursday.

While almost all countries face a slowdown, differences remain “pronounced,” the report from the European Commission said, with the debt crisis hitting worst those nations with poor public finances, weak banks and a history of low growth — a cocktail common to several countries in Southern Europe.

Meanwhile, so serious is the recession in Spain that it may be given more leeway over meeting budget targets laid down by the commission, the E.U.’s executive branch.

“Decisions will be taken once we have a full picture,” Olli Rehn, the European commissioner for economic and monetary affairs, said Thursday.

The euro zone economy as a whole will probably shrink 0.3 percent in 2012, the commission said. Last November, it had forecast growth of 0.5 percent.