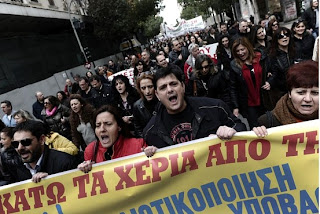 Austerity measures are battering growth across Europe, but policy makers are giving no hint of any letup in their insistence that government belt-tightening is the key to resolving the region's debt crisis.

Many governments may be increasing the pain, however, by not following what multinational organizations prescribe as the most effective budget-cutting practice: Cut government spending before raising taxes.

"International experience shows expenditure-based fiscal consolidation tends to be more successful" than increasing taxes, says the Organization for Economic Cooperation and Development in a recent report.

The by-now-conventional advice that spending cuts should be at least two-thirds of any fiscal cutback is based on the argument that higher tax rates can stifle enterprise. Boosting consumption taxes, such as the value-added tax, can also increase inflation, which makes central banks less likely to cut interest rates.

But in much of Europe, increasing taxes is easier politically than firing government workers or cutting their salaries. 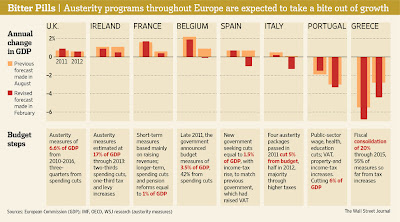 Posted by Yulie Foka-Kavalieraki at 8:25 AM