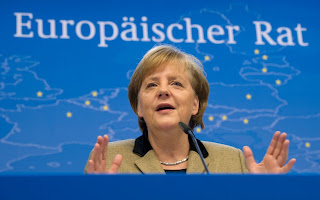 The banners outside the EU Council building in Brussels read "No to the Savings Pact, Yes to Solidarity." Striking Belgian workers gave their verdict on the outcome of the first EU summit of 2012 on Monday: an umistakable thumbs down.

In the conference hall, leaders once again talked austerity, and 25 of the 27 heads of government signed up to the pact for stricter fiscal discipline that Chancellor Angela Merkel has been pushing for. Only Britain and the Czech Republic refused to join.

Merkel called it a "very successful result." She imposed the fiscal pact, which includes binding limits on budget deficits and quasi-automatic sanctions on countries that breach deficit and debt limits, virtually on her own. And she did it in just two months. Progress has been much faster than most observers had expected when the pact was agreed to at the EU summit last December.

But Merkel can't be wholly satisfied. She spent much of the day neutralizing a strategically misguided suggestion from the German Finance Ministry. On Friday, the Financial Times reported that Germany wanted to dispatch an EU budget commissioner to Athens to monitor Greece's fiscal policy. The article referred to an internal ministry paper.

While politicians from Merkel's center-right coalition expressed delight at the idea over the weekend, the Greek government protested at what it called a "sick fantasy" and demanded respect for its national dignity.