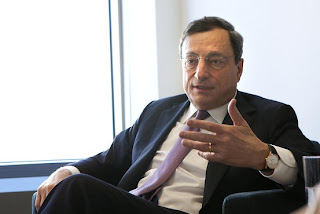 "There is no feasible trade-off" between economic reforms and fiscal belt-tightening, Mr. Draghi said in an interview with The Wall Street Journal, his first since Greece sealed its second bailout. "Backtracking on fiscal targets would elicit an immediate reaction by the market," pushing interest-rate spreads higher, he said.

Mr. Draghi's comments come amid an intensifying debate in Europe over whether deeper austerity is the best prescription for countries facing substantial economic contraction and place him squarely in the hard-line camp, alongside Angela Merkel and other German officials.

In a wide-ranging discussion at his Frankfurt office, Mr. Draghi reflected on how the region's fiscal travails were pushing Europe toward a closer union. He said the crisis has shown that Europe's vaunted social model was all but dead. There are no quick fixes to Europe's problems, he said, adding that expectations cash-rich China will ride to the rescue were unrealistic. He argued instead that the ongoing economic shocks would force countries to undertake structural reforms to labor markets and other aspects of the economy, ensuring the region's long-term prosperity.

Read the Interview
Posted by Yulie Foka-Kavalieraki at 6:44 PM