Draghi must be wary of Ltro elixir’s power 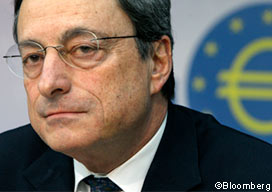 A trillion euros? Half as much – or less? The level of demand in the European Central Bank’s second offer of cheap, unlimited three-year loans to eurozone banks this week will be watched with trepidation by some in Frankfurt. It could shape the presidency of Mario Draghi and his relationship with Germany and its Bundesbank.

Like an elixir discovered by an alchemist, the three-year longer-term refinancing operations have produced eye-catching results for Mr Draghi, who only took office in November. The first, in December, saw the ECB providing €489bn and marked a turning point for the eurozone.

Demand on Wednesday will also be strong. This time, there are rules making it easier for smaller banks to use their loan books as collateral when tapping the ECB, which could, in theory, increase demand by as much as €200bn.