A deal, but to what end? 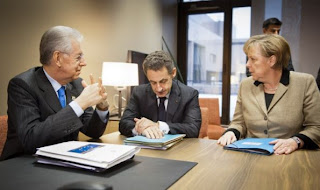 By the standards of past summits, European leaders finished early—shortly before 10pm on January 30th. And by the acrimonious standards of past gatherings, notably last month’s bust-up with Britain, this event was uneventful, even amicable. Agreement was reached on the fiscal compact, the new treaty to toughen budget rules, in record time: less than two months.

A final row between France and Poland over who gets to attend which summits was resolved with a complicated compromise. This involves variable configurations of meetings involving 17 countries (the euro zone), 23 (the largely-forgotten Euro-Plus Pact, 25 (the signatories of the fiscal compact), 27 (all EU member states, still in charge of the single market) and 28 (involving soon-to-join Croatia).

It shows that, at the very least, European leaders can negotiate rapidly when they have the political will to do so—and when the British and the Czechs decide to step aside. Whether electorates will be quite so quick to shackle themselves to Germanic fiscal rules is another matter.

But did the leaders achieve anything useful to stem the crisis in the latest of their interminable summits? Their compact—now called the “treaty on stability, co-ordination and governance in the Economic and Monetary Union”, has as its main aim the imposition of balanced-budget rules on members. This may be a useful discipline in good times. But many worry that, at a time of widespread crisis, such pro-cyclical rules risk imposing too much austerity too widely, thus darkening the spectre of recession and making it even harder to balance budgets. This may explain why leaders suddenly want to be seen talking about their plan (declaration is here in PDF) for growth and jobs, particularly in tackling the problem of youth unemployment.