Bond Myths Are Exposed by Greece 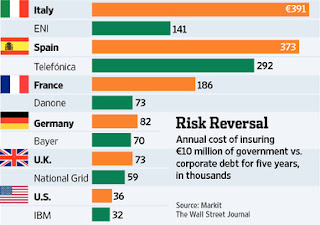 It used to be so simple. Developed-country government bonds were risk-free, while corporate bonds carried credit risk to varying degrees. The euro-zone crisis has exposed that assumption to be false.

Not only do some government bonds contain credit risk. But the Greek debt restructuring is showing that in some ways, corporate-bond investors have more clout—and are less exposed to arbitrary actions—than their government peers.

Greece is hoping bondholders will write off over €100 billion ($132.4 billion) of debt in a voluntary bond swap. But in an attempt to ensure the swap is completed, it is also introducing collective-action clauses in its bonds. That will mean that if enough bondholders sign up, even those that don't will be swept up in the swap. Meanwhile, the European Central Bank has done a side deal with Greece that means its bonds are excluded from these clauses and thus won't take losses. Unlike the International Monetary Fund, which injects new money to help fund a distressed country on the understanding its debt is ranked above other bonds, the ECB simply bought in the secondary market and then declared it wouldn't take a loss. Its estimated holding of €45 billion of Greek bonds means that private-sector investors have to take deeper losses to make the numbers work.

More
Posted by Yulie Foka-Kavalieraki at 8:13 AM