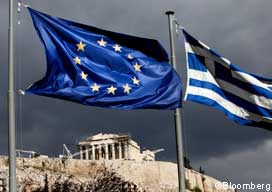 European creditor countries are demanding 38 specific changes in Greek tax, spending and wage policies by the end of this month and have laid out extra reforms that amount to micromanaging the country’s government for two years, according to documents obtained by the Financial Times.

The reforms, spelt out in three separate memoranda of a combined 90 pages, are the price that Greece has agreed to pay to obtain a €130bn second bail-out and avoid a sovereign default that the government feared would throw Greek society into turmoil.

“The programme is much, much more ambitious than economic reform,” said Mujtaba Rahman, Europe analyst at the Eurasia Group risk consultancy. “This is state building, as typically understood in traditional low-income contexts.”

Most urgency is attached to a 10-page list of “prior actions” that must be completed by Wednesday in order for eurozone finance ministers to give a final sign-off to the new bail-out at an emergency meeting scheduled for Thursday.