Are Greeks the hardest workers in Europe? 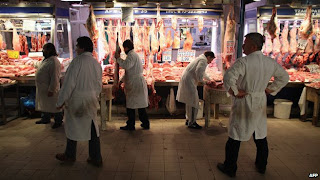 The eurozone crisis has sown divisions in the European family, and Greece in particular has often been singled out for criticism. Has Greece been living beyond its means? Are Greeks lazy? On this second point, the statistics tell a surprising story.

This week Greece is facing more spending cuts after agreeing to a deal of 130bn euros (£110bn, $175bn) to help it avoid bankruptcy.

But the statistics suggest the country has not lost its way due to laziness. If you look at the average annual hours worked by each worker, the Greeks seem very hard-working.

Figures from the Organisation for Economic Co-operation and Development (OECD) show that the average Greek worker toils away for 2,017 hours per year which is more than any other European country.

Out of the 34 members of the OECD, that is just two places behind the board leaders, South Korea.

On the other hand, the average German worker - normally thought of as the very epitome of industriousness - only manages 1,408 hours a year. Germany is 33rd out of 34 on the OECD list (or 24th out of 25 looking at the European countries alone).

More
Posted by Aristides N. Hatzis at 8:19 AM