Angela the lawgiver: A pact to cut budget deficits is achieved at the cost of a growing democratic deficit 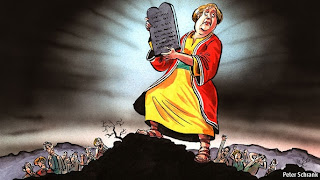 Thou shalt not incur a structural deficit. Thou shalt pay down thy excessive debt. Thou shalt adopt a balanced-budget rule in thy constitution, and subject it to the European Court of Justice...

It took just a little more than 40 days and 40 nights for Angela Merkel to bring down the tablets of fiscal law. At a summit in Brussels this week, 25 European leaders pledged to observe this covenant and made burnt offerings of their economic sovereignty. But the children of Europe are crying into the wilderness: “How long, Lord, must we be tormented by austerity?”

Mrs Merkel holds out the prophecy of a political union. For the time being, though, and for years to come, deficit-cutting is the only path to righteousness, she says. Look at Italy and Spain: markets relented once they started reform in earnest. Look at Greece, the doubters retort: EU-induced budget cuts are pushing it into recession and insurrection, and closer to chaotic default. And Portugal is testing the notion that Greece is alone.

Some see hope in things that Mrs Merkel has not yet done. She did not block a debate, due in March, on enlarging the euro’s rescue fund. She did not demand the return of unused EU money, instead allowing it to be redirected to projects to boost growth and jobs. And she did not strike down the European Central Bank for creating a torrent of liquidity for banks (see article). Still, the promised land of Eurobonds, and of the ECB lending to sovereigns, seems beyond the reach of today’s politicians.