Victory for Merkel over fiscal treaty 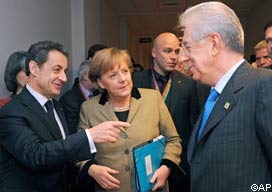 European leaders have agreed to back a fiscal discipline treaty, handing Angela Merkel, German chancellor, a symbolic victory in her months’ long drive to enforce tough budget limits for the single currency.

Under the pact, eurozone countries would be legally bound to balance national budgets over time – a price that European leaders see themselves paying to ensure Berlin’s fiscal might continues to back the single currency.

But it also comes as leaders and institutions around the world, from the International Monetary Fund to Italy’s prime minister, question the austerity-centred policy backed by Ms Merkel. Some likened the pact to outlawing Keynesian-style fiscal stimulus.

“We have to learn to explain that it’s not just about the consolidation of our finances, but we also need the prospect of growth,” Jean-Claude Juncker, Luxembourg’s prime minister, said as he headed into the European Union summit in Brussels. As a consequence, the summit was nominally focused on creating jobs in the EU.